MARCH 2019: A Foreword INDIE Book Of The Year Finalist

One hundred and two Canadian writers published by university presses, small traditional publishers and author-publishers, have been shortlisted for an American writing award—and there may be more.

Forty-two Canadian books, fourteen fiction and poetry and the remainder non-fiction, have been chosen as finalists in the 2018 Foreword INDIES Book Of The Year Award, according to a list compiled by nominee Ann Shortell. Some books have multiple authors; in fact, fifty-four writers are represented in two anthologies and one collection of short stories. Still, “when I set out to find other Canadians shortlisted for a Foreword Award,” said Shortell, who is shortlisted in the Multicultural Fiction category for CELTIC KNOT A CLARA SWIFT TALE,  “I did not expect to find more than a hundred writers.”

Shortell’s publisher, FriesenPress of Victoria, B.C., has one other author-publisher on the Foreword list: non-fiction author Mark Cote, who is also nominated for the Saskatchewan Book Award for THAT LUCKY OLD SON. “In another century, when I was a journalist, it was easy for media to write about Canadian authors—we were all promoted by the same few publishers,“ says Shortell, also a multiple nominee as a finalist for the Sarton Women’s Book Award and a past finalist for the Arthur Ellis ‘Unhanged’ Award. “Today, publishing’s new global platforms allow authors to take control of their own books—which also means novels can be well-reviewed internationally and yet may be under the radar of Canadian literary media,”

Awards like the Foreword INDIES help to right that balance, she said. Founded in 1998, Foreword Magazine, Inc. is devoted to independent publishing. Publishers of Folio, itself an award-winning bimonthly print review journal,  as well as daily online content feeds, Foreword exclusively covers university and independent (non “Big 5”) publishers, the books they publish, and their authors. Foreword is based in Traverse City, Michigan, with staff based worldwide.

“Determining the INDIES Finalists is such a rewarding process,” said Victoria Sutherland, founder and publisher of Foreword Reviews. “Each year we are reminded what a vital part of publishing indie presses occupy, and knowing what the recognition could mean to an individual book inspires us to provide our finalist judges with the best choices to help them determine the winners. We take this privilege very seriously.”

As part of its mission to discover, review, and share the best books from university and independent publishers, Foreword Magazine, Inc. has hosted an annual awards program for 21 years. Finalists represent the best books published in 2018. After more than 2,000 individual titles spread across 56 genres were submitted for consideration, the list of finalists was determined by Foreword’s editorial team. Winners are decided by an expert team of booksellers and librarians—representing Foreword’s readership—from across the United States.

Winners in each genre—along with Editor’s Choice Prize winners and Foreword’s INDIE Publisher of the Yearwill be announced June 14, 2019.

Shortell identified other writers through her own recognition of the books or authors, or by delving into a book’s plot or checking an author’s bio. Foreword provided a list of finalists with Canadian publishers. There may, she suggests, be more Canadians—with U.S. publishers and international storylines—who are difficult to discover. “An award like Foreword places a spotlight on the quantity of high-quality books being written here and produced by Canadian indie publishers. I’d like to congratulate all the Canadian writers shortlisted. I’m hoping, by bringing these names to public attention, I will discover more Canadians honoured by Foreword.” Shortell said. “It’s a rare honour to be a finalist in an international writing award, one we should all celebrate."

THE FOREWORD INDIE BOOK OF THE YEAR CANADIAN FINALIST LIST:

I had the great pleasure of being interviewed by Austin Comerton on Irish Radio Canada about the history and mystery, the political and the personal, and how that’s all wound together in CELTIC KNOT.

To celebrate D’Arcy McGee, Austin launched the novel’s first ebook giveaway -- it’s going on right now!
​
To hear the interview, please tune in via this website’s MEDIA page.
To participate in the iTunes ebook giveaway, please use this link:

RECENT EVENTS
the pleasures of the past...

CELTIC KNOT  was one of only three Canadian indie novels chosen for inclusion in the July 1st issue of the venerable
U.S. publishing journal Kirkus Reviews Magazine.
Kirkus reviews are relied upon by librarians and booksellers. Indie books must rank in  the top ten percent of all books reviewed to be included in the bimonthly magazine. 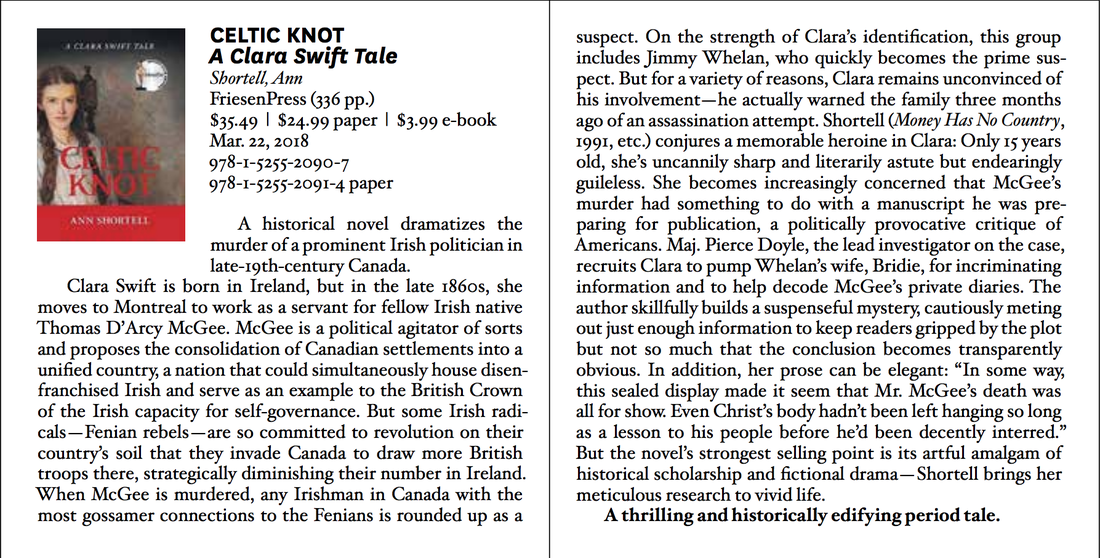 ​CELTIC KNOT  was one of three books featured as a ‘Marian’s Pick’ for the month of June by Sleuth of Baker Street co-owner and Canadian mystery-writing scene maven Marian Misters --the novel was chosen for this honour from 128 new books listed in the store’s monthly newsletter. 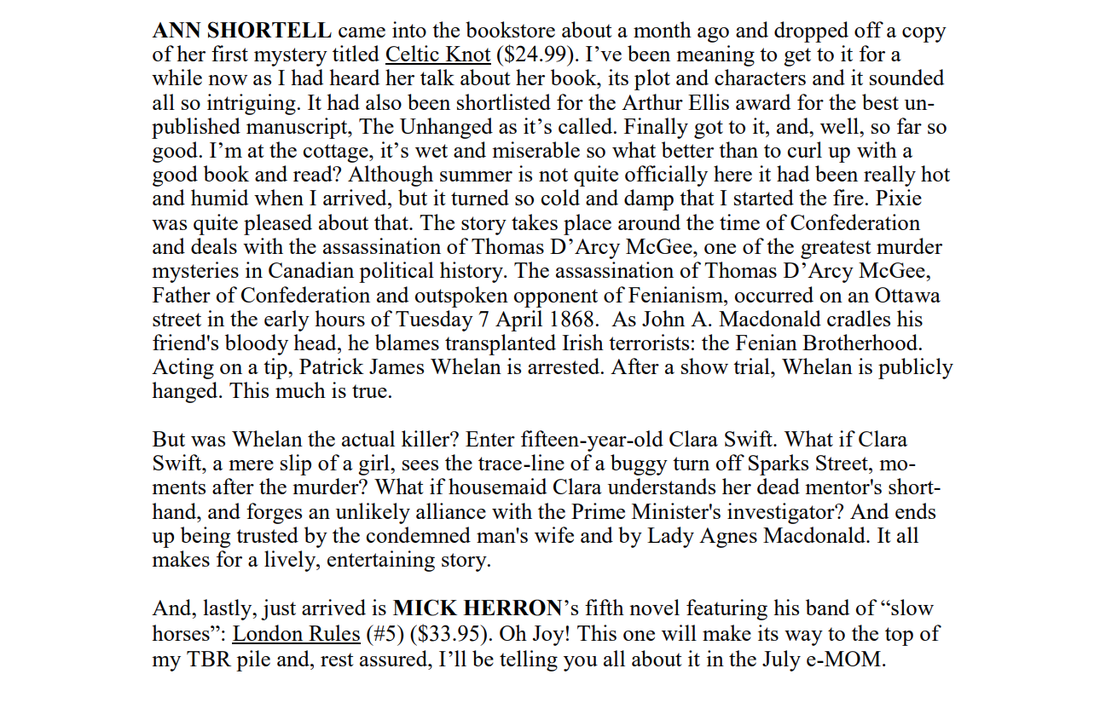